An addendum on effective population size

Posted on Tue 31 December 2019 by Will Bradshaw

Follows from: Evolution is Sampling Error

The field of biology that deals with the evolutionary dynamics of populations — how mutations arise and spread, how allele frequencies shift over time through drift and selection, how alleles flow between partially-isolated populations — is population genetics. “PopGen” differs from most of biology in that its foundations are primarily hypothetico-deductive rather than empirical: one begins by proposing some simple model of how evolution works in a population, then derives the mathematical consequences of those initial assumptions. A very large and often very beautiful edifice of theory has been constructed from these initial axioms, often yielding surprising and interesting results.

Population geneticists can therefore say a great deal about the evolution of a population, provided it meets some simplifying assumptions. Unfortunately, real populations often violate these assumptions, often dramatically so. When this happens, the population becomes dramatically harder to model productively, and the maths becomes dramatically more complicated and messy. It would therefore be very useful if we could find a way to usefully model more complex real populations using the models developed for the simple cases.

There are various ways in which deviations from the ideal assumptions of population genetics can cause a population to act as though it were smaller – i.e. to have an effective size (often denoted \(N_e\)) that is smaller than its actual census size – but two of the most important are non-constant population size and, for sexual species, nonrandom mating. According to Gillespie (1998), who I’m using as my introductory source here, fluctuations in population size are often by far the most important factor.

Many natural populations fluctuate wildly in size over time, both cyclically and as a result of one-off events, leading to effective population sizes much smaller than would be expected if population size were reasonably constant. In particular, the human population as a whole has been through multiple bottlenecks in its history, as well as many more local bottlenecks and founder effects occurring in particular human populations, and has recently undergone an extremely rapid surge in population size. It should therefore not be too surprising that the human \(N_e\) is dramatically smaller than the census size; estimates vary pretty widely, but as I said in the footnotes to the last post, tend to be roughly on the order of \(10^4\).

In sexual populations, skewed sex ratios and other forms of nonrandom mating will also tend to reduce the effective size of a population, though less dramatically3; I don’t want to go into too much detail here since I haven’t talked so much about sexual populations yet.

As a result of these and other factors, then, the effective sizes of natural populations is often much smaller than their actual census sizes. Since genetic drift is stronger in populations with smaller effective sizes, that means we should expect populations to be much more “drifty” than you would expect if you just looked at their census sizes. As a result, evolution is typically more dominated by drift, and less by selection, than would be the case for an idealised population of equivalent (census) size.

Posted on Thu 12 December 2019 by Will Bradshaw

A common mistake people make about evolution is to think it’s all about natural selection and adaptation. In fact, random non-adaptive changes often dominate the evolutionary process.

Today I’m going to lay out a useful framework that I hope makes this fact more intuitive, which might in turn help non-experts build better intuitive models of evolutionary processes. This will come in handy when I try to explain non-adaptive theories of ageing later on.

We can think of evolution as sampling error: deviation in the genetic composition of the offspring in a population relative to their parents. To illustrate this, let’s imagine a simple, asexual population, evenly divided between two gene variants (alleles) which produce no difference in fitness1: 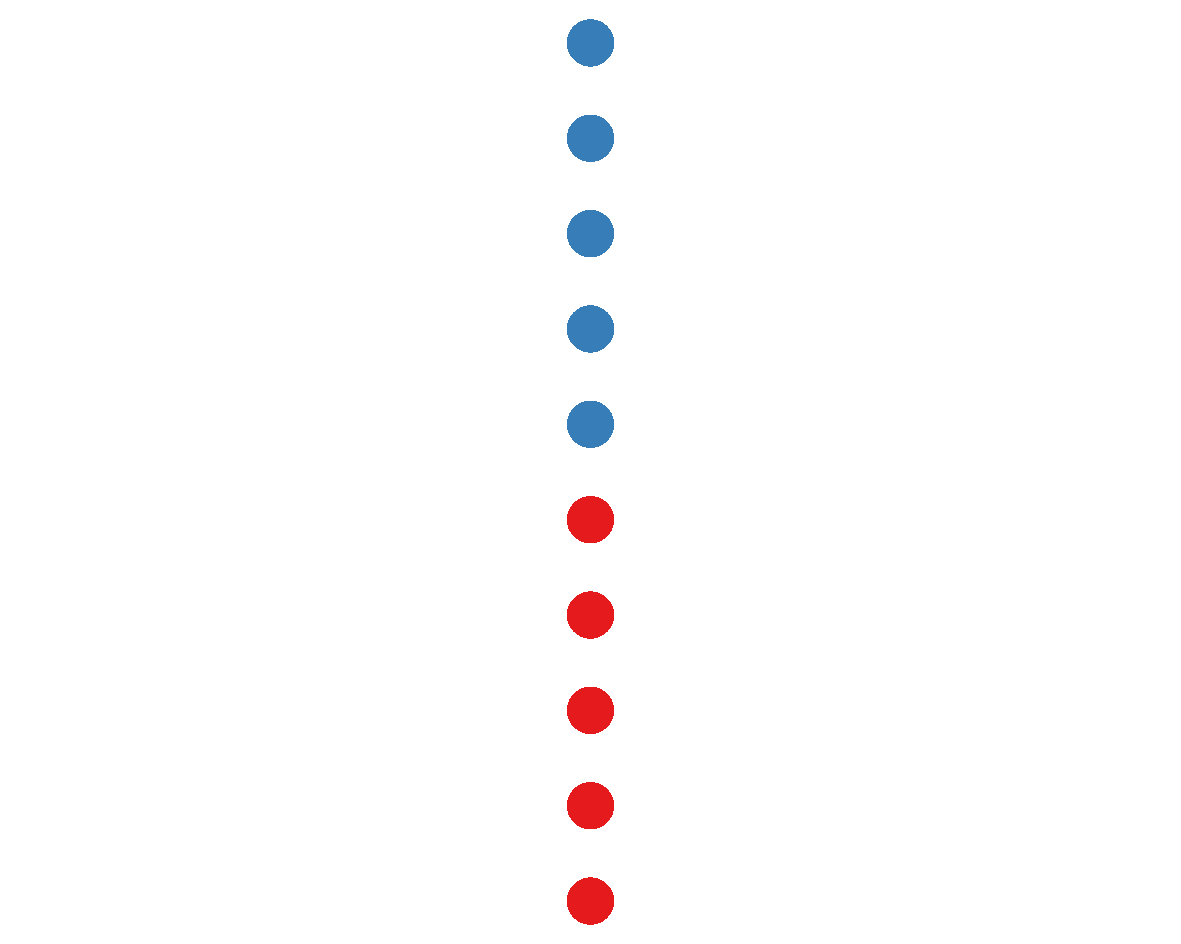 These individuals will reproduce, giving rise to the next generation. Since all the individuals are genetically identical and have the same chance of reproducing, we can think of these offspring being randomly sampled, with replacement, from the previous generation: 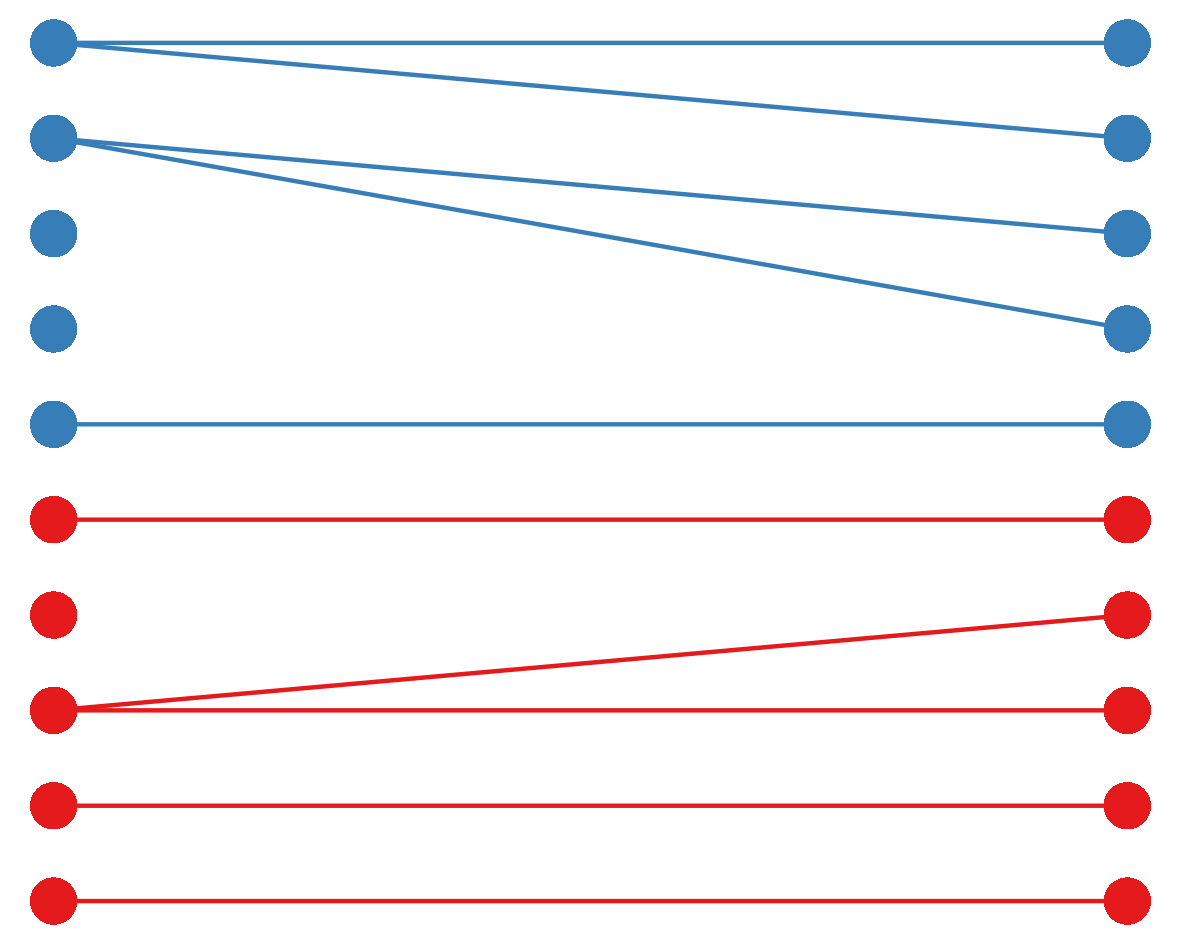 Since there is a great deal of randomness involved in who reproduces successfully and whose offspring survive, not all individuals will produce the same number of offspring in the next generation, even though they all had the same probability of reproducing to begin with. As a result, even in the absence of selection effects, the allele distribution of the new generation is likely to differ from that of the previous generation; this random, unbiased change in allele distribution is known as genetic drift.

As a result of genetic drift, the allele distribution will fluctuate up and down stochastically; sooner or later, one or the other will be eliminated from the population, resulting in fixation:

The time to fixation depends on the population size2 and some other population parameters; here’s an example plot for a population with a carrying capacity of 200 instead of 10: 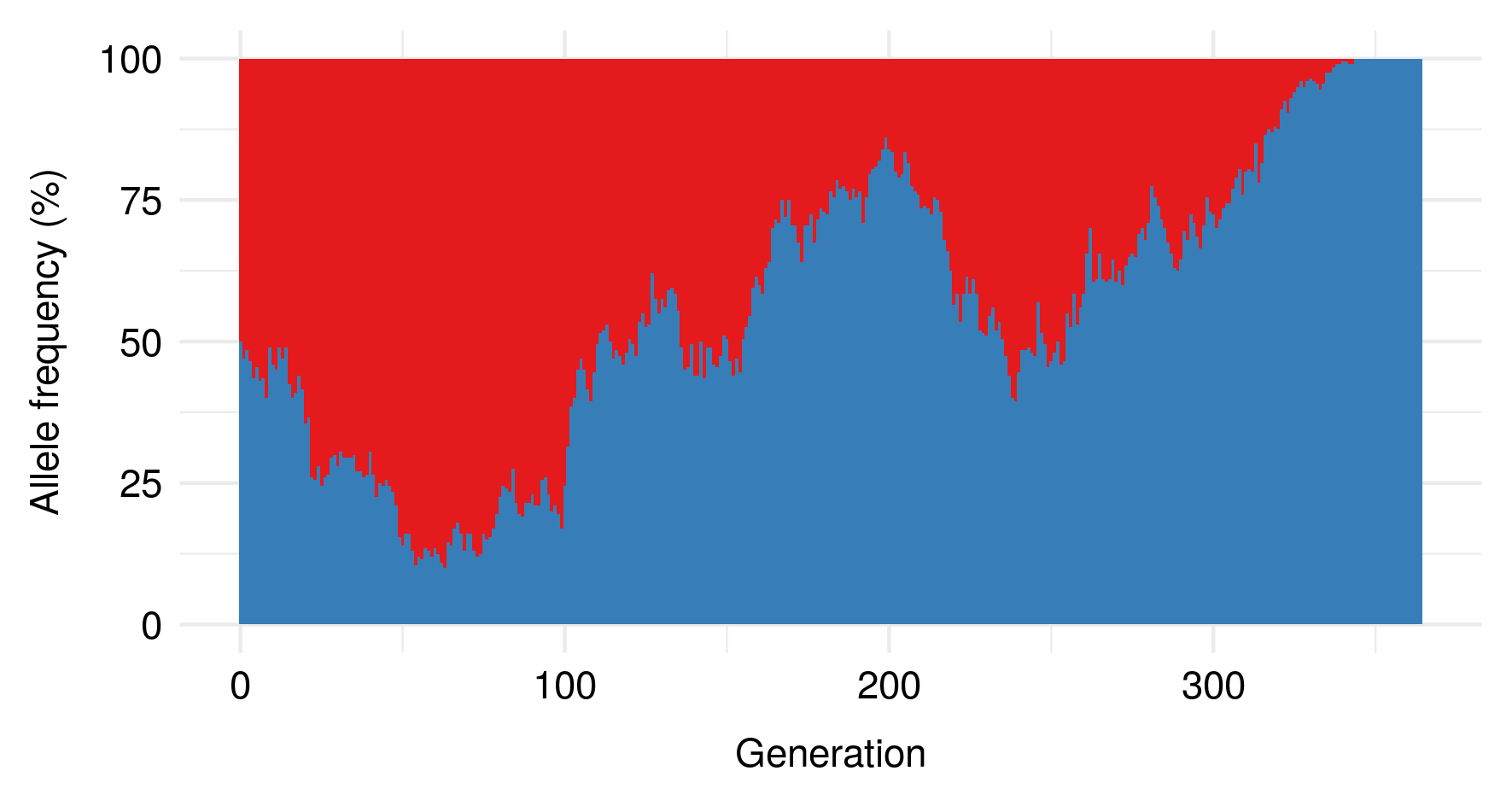 Fairly dramatic genetic changes, then, can accumulate in a population based purely on genetic drift; there’s not necessarily any need to invoke selection to explain why genetic differences between populations accumulate over time. That said, what happens when we add selection into the mix?

Suppose that one of the starting alleles in the population is less fit than the other: individuals with that allele are less likely to produce reproductively-successful offspring. What happens now?

If one allele is much less fit than the other, the individuals bearing it will probably die without issue, producing a very boring plot:

So far, so trivial. The interesting cases occur when the fitness of one genotype is close to (either a bit higher or a bit lower than) the old one. In this case, thanks to genetic drift, the less-fit allele (here in purple) can persist in the population for a surprisingly long time…

Overall, under these conditions (carrying capacity = 10, relative fitness ~ 0.9) the less-fit allele will reach fixation about a quarter of the time; more than enough for 100% the population to be bearing many deleterious alleles.

These results are a pretty trivial application of statistics, but they have very important implications for how we should view evolution. Thanks to genetic drift, beneficial mutations will often die out and deleterious ones reach fixation. How often this occurs depends on various factors, the most obvious of which is the magnitude of the mutation’s effect on fitness — the more dramatic the effect, the greater selection’s ability to overcome drift and eliminate the less-fit allele.

However, another crucial variable, underappreciated outside evolutionary biology, is population size.

Evolution and the law of large numbers

In our framework of evolution as sampling error, natural selection determines the expected value: the number of offspring of each genotype we expect to see in the next generation, given the distribution in the current generation. But the smaller the population, the more likely it is to deviate substantially from this expectation – that is, for random genetic drift to overwhelm the bias imposed by natural selection.

If you combine this sample-size-dependent variability with the absorbing nature of fixation and elimination (that is, once an allele has been eliminated, it isn’t coming back), you obtain the result that the larger the population, the more likely it is that the fitter allele is actually the one that gets fixed, all else equal. We can see this in our toy model from earlier, where the green allele is 10% fitter than the purple allele and both start with 50% prevalence in the population: 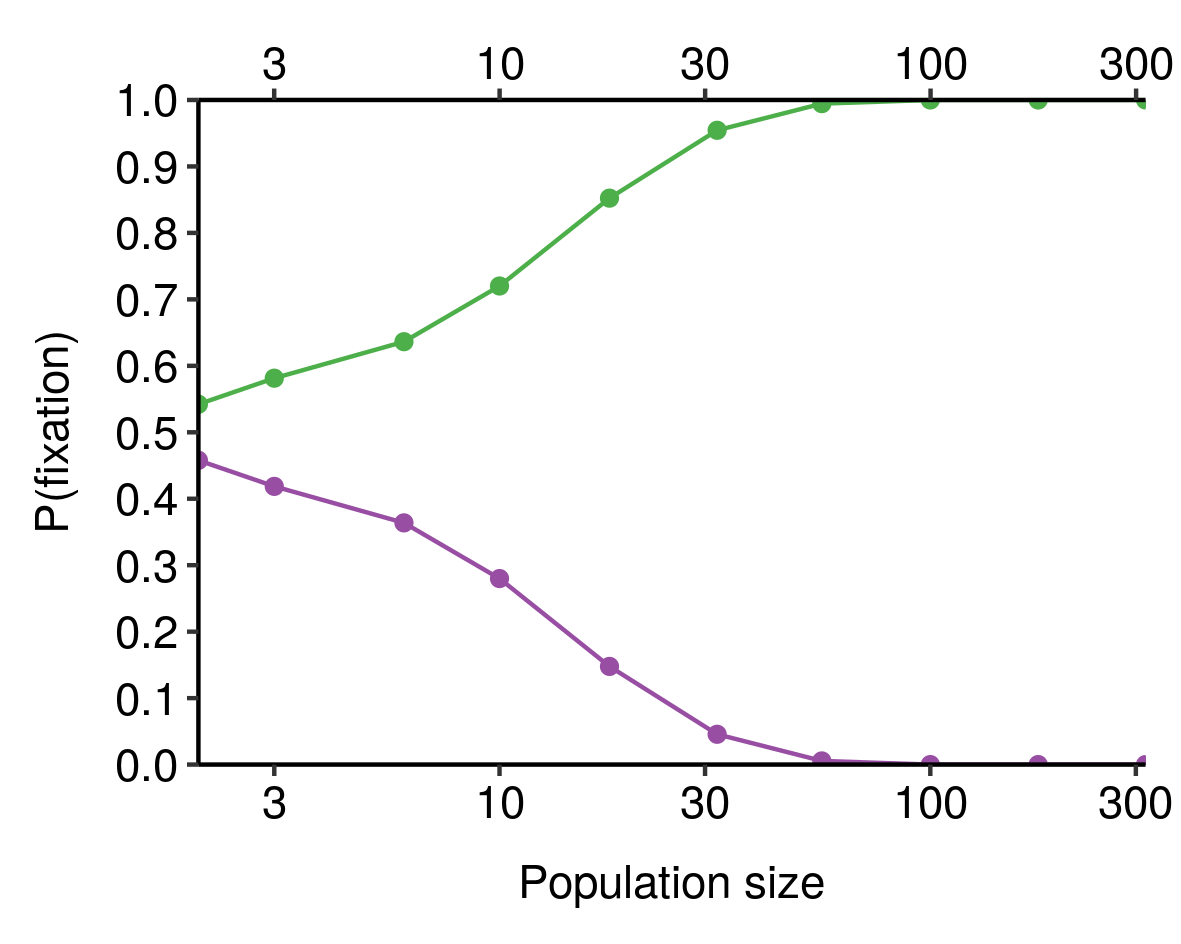 Population size, then, is a crucial factor affecting the optimisation power of evolution: the larger the population size, the greater the capacity of natural selection to select for beneficial mutations and eliminate deleterious ones. This is why bottlenecks and founder effects are so important in evolution: by reducing the size of the population, they both increase the relative prevalence of rare mutations and decrease the relative strength of natural selection, resulting in very powerful drift. The results of this can be quite striking: on the tiny Micronesian island of Pingelap, for example, almost 10% of the population are completely colourblind, a condition that is extremely rare elsewhere5. This is believed to be the result of a typhoon in 1775 that left only 20 survivors, one of whom was a carrier of the condition6.

What can we infer from all this? Firstly, when thinking about evolutionary processes it’s vital not to neglect genetic drift. Just because something spread throughout a population and reached fixation does not mean it is adaptive. Secondly, this is especially true when populations are small, and we should always pay careful attention to population size when thinking about how a population might evolve. In general, we should expect larger populations7 to be fitter than smaller ones, since (among other things) natural selection will be more effective at weeding out deleterious alleles and propagating beneficial ones.

Finally, it has not escaped my notice that this framework has obvious implications for thinking about analogous evolutionary processes that might occur outside of biology. More on this anon.